What Is CBD & How Does It Work?

Cannabidiol, also referred to as CBD, is one of many cannabinoids found in cannabis and hemp plants. There is another cannabinoid you might be familiar with – THC. This is the cannabinoid that gets you high when you consume cannabis plants like marijuana.

Both CBD and THC are called phytocannabinoids, because they are cannabinoids that are produced naturally by plants. However, unlike THC, CBD is non-psychoactive, meaning it doesn’t get you high. It is found more prevalently in the cannabis hemp plants.

It does, however, produce significant changes in your body. 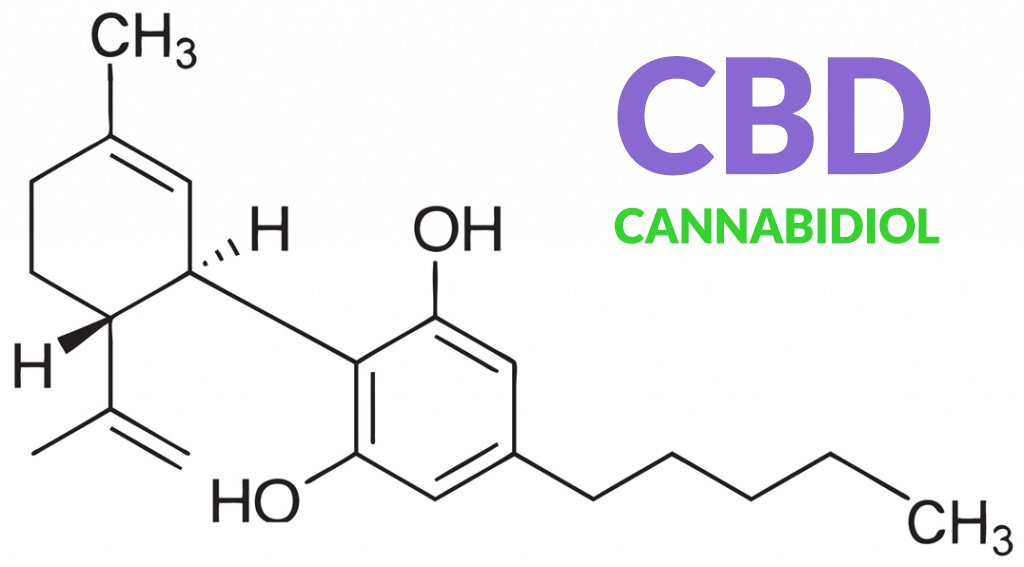 How does CBD work?

As noted earlier, CBD is a phytocannabinoid. Coincidentally, we have a biological system in our bodies called the endocannabinoid system, and as you might have guessed, CBD plays well with it.

The endocannabinoid system is involved in regulating a variety of physiological and mental processes including fertility, pregnancy, appetite, pain-sensation, mood, and memory.

Your brain and body talk to each other via a system of nerves and neurotransmitters. Think of the nerves like roads from your brain to all parts of your body. Your spine is a major highway, and the nerves get smaller from there, just like our other roads and streets.

Some of these chemicals contain messages to give us pleasure – endorphins, dopamine, serotonin.

Some of these chemicals contain messages to give us pain – glutamate and substance P.

The thing about your nerves is that they have to be very long to reach some parts of your body. The nerves running from your toes to your brain are really long.

Between each of these nerve cells is a small gap called a synapse. 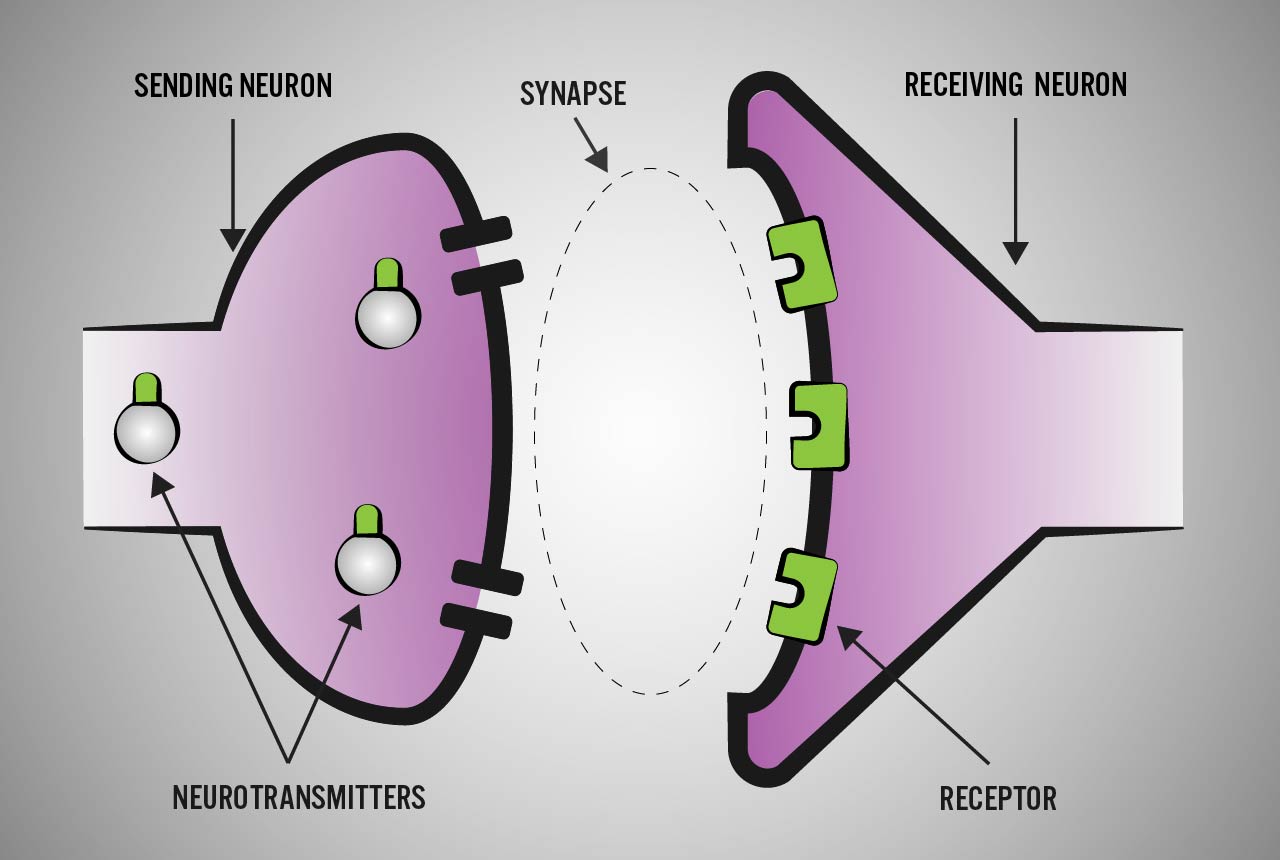 In order for the messages that the nerves are carrying to get across these gaps, they are carried by neurotransmitters.

Different messages have different shapes, and that is how our brain can tell the difference between pleasure and pain. 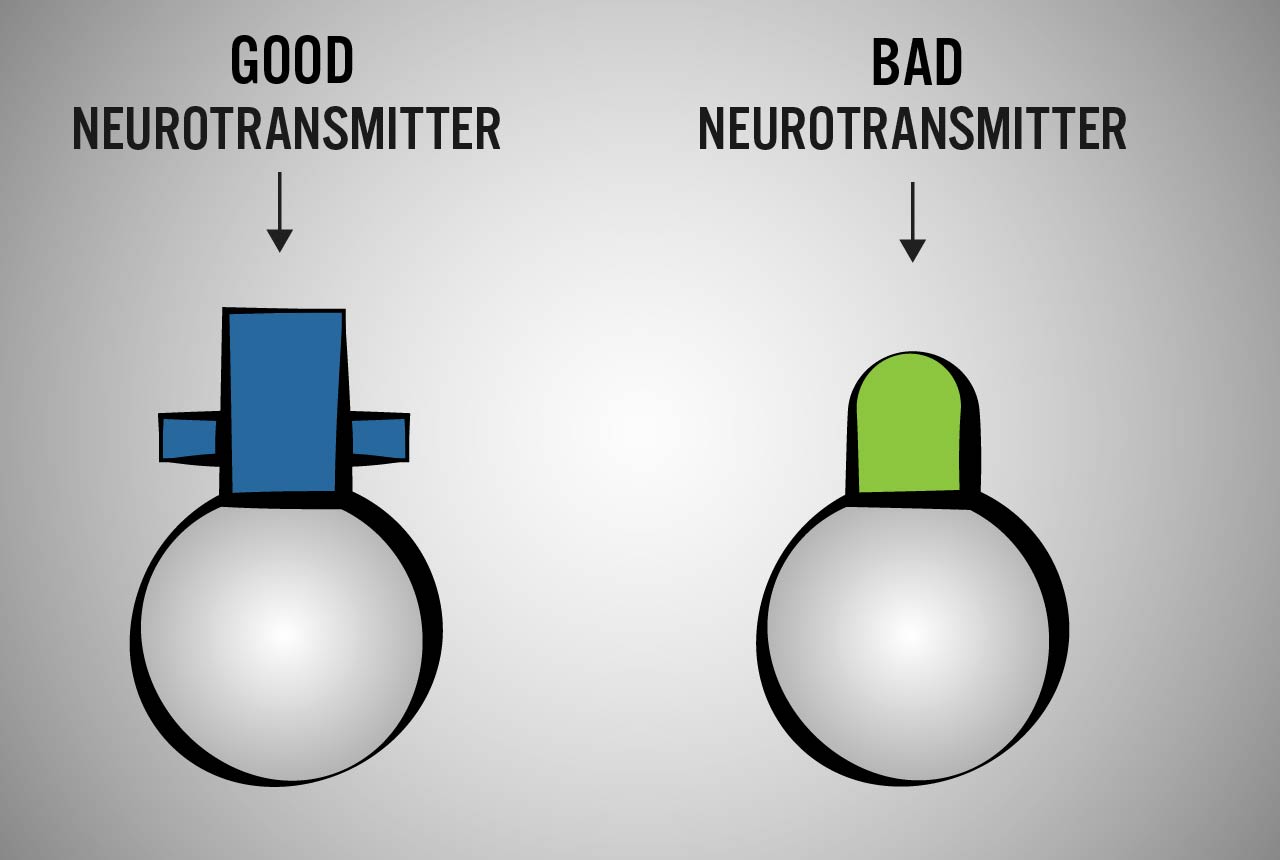 Our nerves have receptors that accept messages of the same shape only. If the neurotransmitter fits in that receptor, the message is passed along to the next nerve. 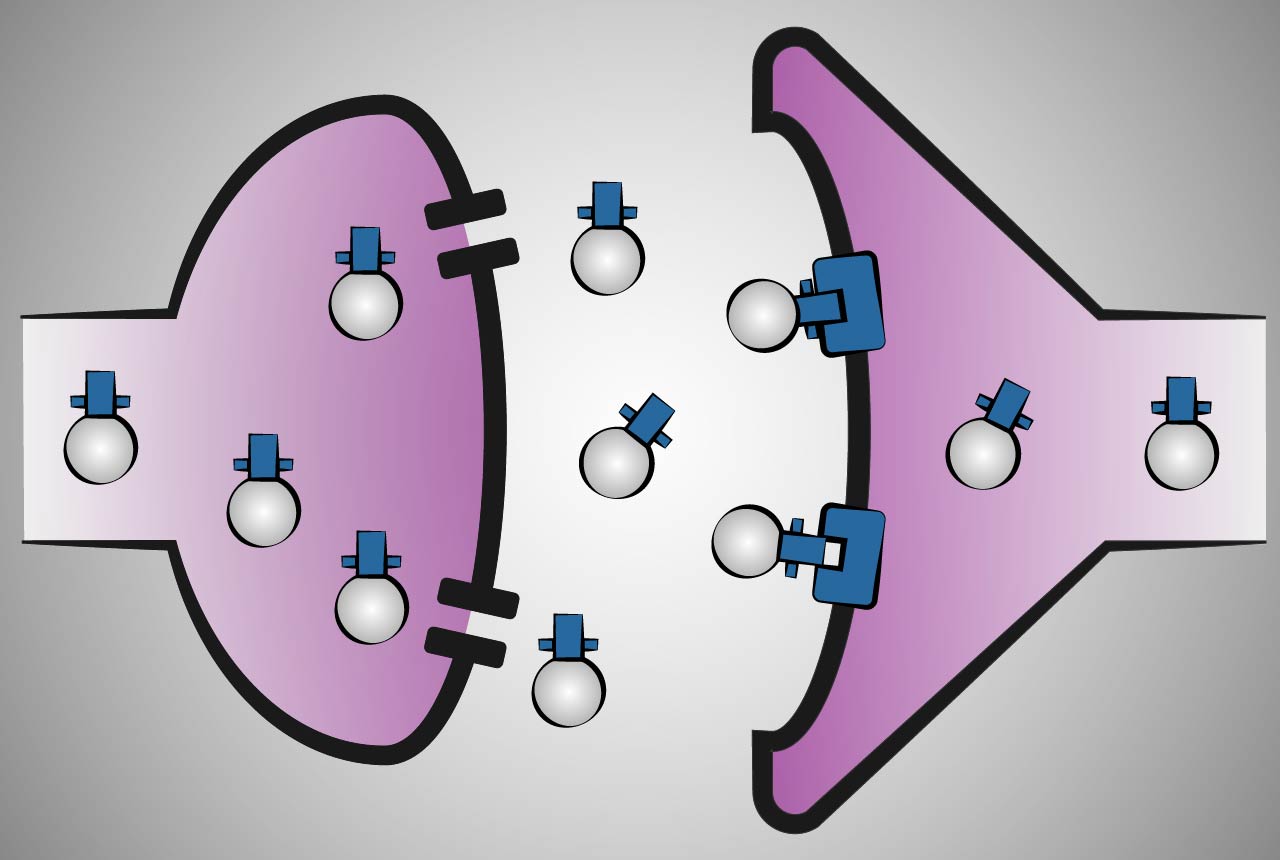 If there is not a neurotransmitter of the same shape, then that message is not passed along. 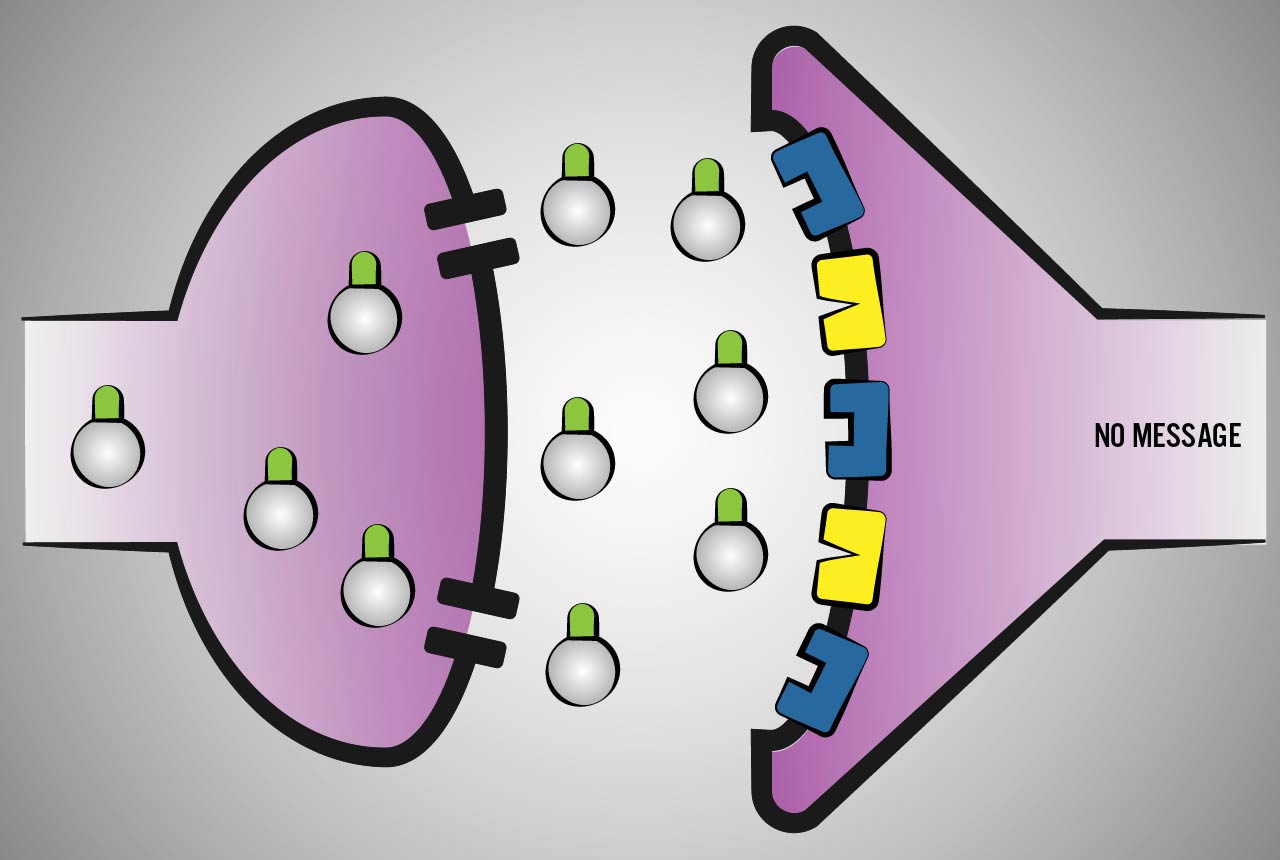 Here the nerve messages don’t have a matching receptor, so the message doesn’t pass.

The part of our nervous system that we use to regulate pain and inflammation in our body (along with several other things like fertility, pregnancy, mood, memory, appetite, and pleasure) is called the endocannabinoid system.

This system uses neurotransmitters called cannabinoids to communicate between your brain and body.

When you find a way to block the message from being passed along to the next nerve, you stop the pain message from reaching your brain. 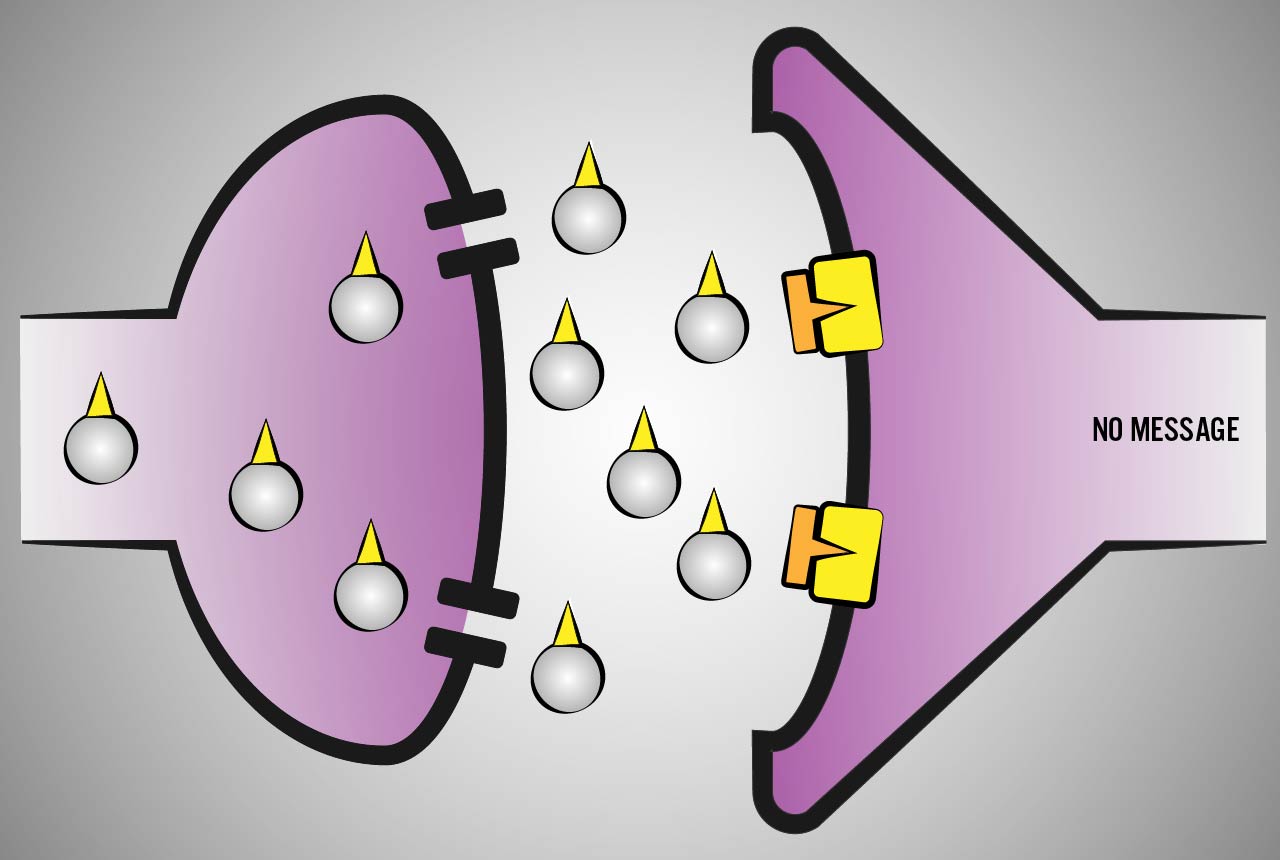 Here there are matching receptors, but they are not able to pass on their message because the openings they fit into are being blocked by the orange CBD.  So no message is sent.

You can block the message if you can plug the receptors on the next nerve so the neurotransmitter cannot connect to it and pass it along.

No message, no pain!

This is what our drugs and medications try to achieve but can’t.

Drugs try to play nice with the endocannabinoid system by mimicking the cannabinoids used to pass the messages along the synapse.

If they are successful, they can trick the matching receptors in the next nerve and bind with it. This stops the message from passing.

If it happens to be a pain message, then you will not feel that pain.

But as you know, many of them fall short of that.

Do you know why?

The prescription drugs available are not compatible with the endocannabinoid system that we use to regulate pain and inflammation in our body.

They cannot plug the receptors effectively, so the messages of pain and inflammation that are trying to pass along your nerves still get through to your brain.

And so you suffer with pain and inflammation.

Thankfully, nature has come to our rescue with the naturally occuring phytocannabinoid CBD.

Dr. Rachel Knox is an experienced physician that specializes in treating patient symptoms by treating the endocannabinoid system.  She refers to herself as an endocannabinologist.  She recently sat down in an interview with Project CBD to discuss her treatments using THC and CBD.  Her explanation is very similar to what is outlined here.

What You Need to Know about CBD

How Much CBD Should I Take?

Can My Pets Take CBD?

How Do I Buy CBD Online?

Will CBD Make Me High?

What You Need to Know about CBD

How Much CBD Should I Take?

Can My Pets Take CBD?

How Do I Buy CBD Online?

Will CBD Make Me High?

Download your free guide New to CBD: A Guide to All Your CBD Questions 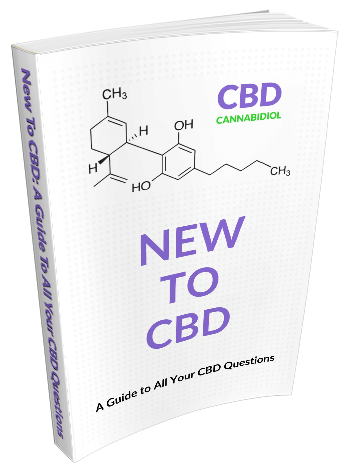 From the CBD Blog